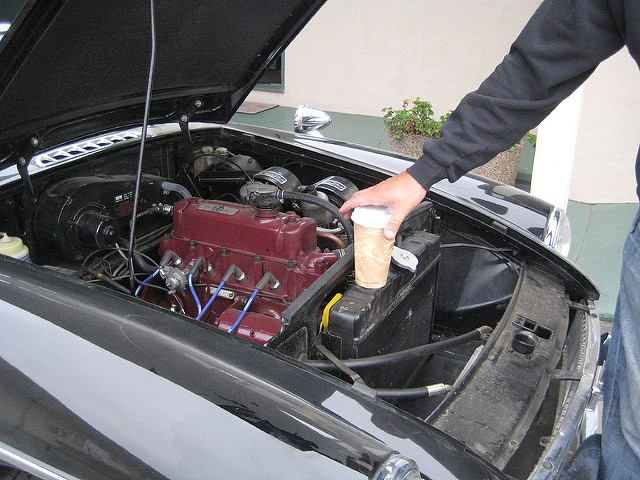 Here's a scenario to consider: you are driving home from work one evening and you notice your temperature gauge rising to the red zone. You pull over, wait for to the engine to cool off, and carefully remove the radiator cap. To your surprise, there's no coolant visible in either the radiator or overflow tank. To make matters worse, there's no auto shop nearby, but there is a gas station with tap water.

So, should you fill your radiator and overflow tank with tap water, or should you wait until you can pick up some actual coolant?

To better answer this question, let's take a closer look at automotive coolant and how it works. Most vehicles use a combination of 50% coolant and 50% antifreeze. As this 50/50 combo flows through the engine, it takes heat from the engine and transfers it to the radiator where it's then released into the air. Problems arise, however, if there's an obstruction or some other failure in the car's cooling system, which subsequently leads to the engine overheating.

Furthermore, there's the issue of contaminants in tap water, which typically aren't found in 50/50 or other types of automotive coolant. Tap water contains a plethora of minerals, chemicals and additives. Although invisible to the naked eye, they are there. When you pour this water into your car's radiator, it spreads these chemicals through the coolant lines, radiator, thermostat and even the engine. Over time, these contaminants will accumulate, creating thick sludge-like material that hinders engine performance while potentially leading to other mechanical problems.

Lastly, tap water isn't going to protect your engine from freezing. When water inside a car's cooling system freezes, it can cause significant damage to the engine and surrounding components. Thankfully, 50/50 coolant is mixed with half antifreeze, protecting the engine from this phenomenon. But plain tap water doesn't have any antifreeze properties, making it a poor choice for use during the winter.