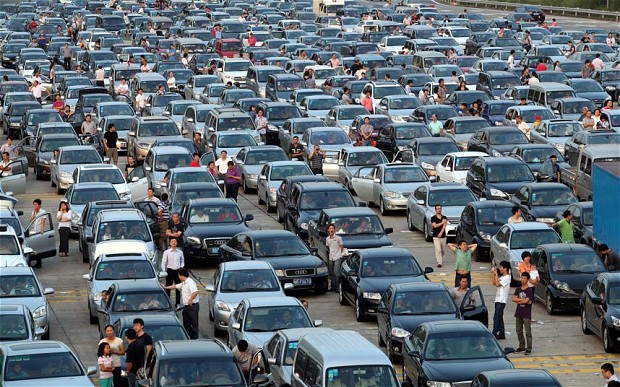 Think your weekday commute is rough? China's G4 Beijing-Hong Kong-Macau Expressway make U.S. highways look like a breeze. Just recently, the G4 experienced one of the world's worst traffic jams of all time.

The monumental jam occurred during the country's Golden Week, which is is a national holiday in China that aims to commemorate the founding of People's Republic of China. According to the Telegraph, the traffic jam was caused by a combination of a new checkpoint, the reduction of open lanes from 50 to 20, and foggy weather. Of course, the fact that it was a holiday is likely to have a played a role in the backup as well. Officials said that more than 740 million people -- half of China's population -- were expected to travel over the week as part of the Golden Week celebrations.

Many motorists are seen exiting their vehicles as they wait for the traffic to clear. This shouldn't come as a surprise, though, considering that most cars were stuck here for hours.

In an interview with reports, Wen Humin, deputy directory of Beijing Transportation Research Centre, revealed that worst days for traffic usually occur during major holidays and bad weather. He goes on to day that traffic jams lasting 3-4 hours, sometimes even longer, are common during peak traffic times around the Chinese capital.

"The worst days are normally when cars with tail numbers of 4 and 9 are banned from entering the city centre. During rainy and bad weather days, or before and after major holidays, traffic congestion is particularly bad. On these days, traffic jams can last more than three to four hours and even longer," said Wen Huimin, deputy director of Beijing Transportation Research Centre.

Unfortunately, China has yet to find a solution to its traffic problem. And with 1.357 billion residents and counting, experts suggest that it will only become worse in the years to come.

Video: Yep, China has the most insane traffic jams in the planet

You can check out the massive G4 traffic jam by clicking the play button above. Captured by an aerial drone flying above, the roughly two-minute-long video shows the chaotic scene as thousands of motorists sit bumper to bumper on the G4. So the next time you think your commute is rough, just remember that motorists went through in this video.