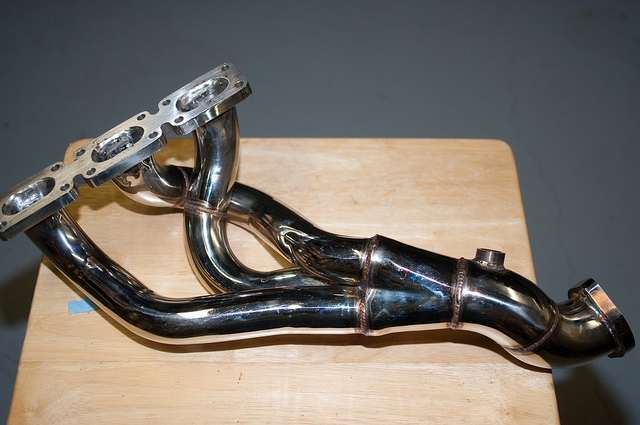 The exhaust system plays an important role in the function of an automobile. When the engine burns fuel for combustion/power, it subsequently produces gases like carbon monoxide that must be released through the exhaust. There are several different ways to accomplish this task, the two most common being an exhaust manifold or a header. So, what's the difference between an exhaust manifold and header, and which one is the best choice for your automobile?

Typically made of cast-iron, exhaust manifolds are typically included in factory cars and trucks. They are inexpensive, relatively easy to install, and are capable of withstanding the high heat and pressure associated with exhaust gases. However, there are a few downsides associated with their use, including the potential for cracking. Cast-iron, although cheap, isn't the strongest material on the planet. As such, it's not uncommon for exhaust manifolds to crack over time, releasing dangerous gases into the engine bay and even the vehicle's cabin.

In order to reduce the risk of cracking, automakers typically opt for thick exhaust manifolds. But the problem with thick exhaust manifolds is that it minimizes the space through which exhaust gases can pass, slowing down the gases while also creating back pressure in the process. Long story short, this reduces horsepower and efficiency -- two critical elements of a vehicle's performance.

But there's an alternative to using an exhaust manifold: headers. Classified as an aftermarket upgrade, exhaust headers consist of stainless steel tubes for each individual cylinder. The tubes converse to a single "collector" pipe, through which the exhaust gases pass before exiting out of the muffler.

Why are headers are a better choice than an exhaust manifold? As stated above, exhaust manifolds create back pressure, which lowers performance. Because each cylinder of the engine is given its own tube, however, headers eliminate this problem; thus, allowing the gases to exit without the creation of back pressure.

There are some potential disadvantages to using exhaust headers, however, such as noise production. Because they are thinner than manifolds, they naturally produce more noise than their counterpart. This isn't a huge disadvantage, but it's still something that drivers need to be aware of when choosing between an exhaust manifold and headers.