Comparing cars is as American as fireworks, apple pie and double cheeseburgers. But here’s a really embarrassing question for you: What does your car's engine bay look like?

Normally, only small amounts of dirt and debris will accumulate there, which should cause no reason for concern. But if you happen to leave the oil cap off, or if the cam plug is leaking (a common occurrence among older model Honda Civics and Accords), oil may have spilled into the engine bay. Neglecting to clean it off can promote rust, eating through the surrounding components.

Engine detailing is a bit of a delicate process. Trying to figure out how to clean engine bay components without breaking something is also a very legitimate concern. However, it’s not only a possibility -- it could be an imperative! Thankfully, we’ve provided some helpful tips for how to clean engine bays safely and easily.

Opening up car hoods and trying to figure out how to clean engine bay safely is a hassle for most can owners. Just looking in there might have you sweating nervously. Even for smaller cars, the engine bay can be fairly large. There are also a lot of nooks and crannies to get into if you want to do an effective job at getting rid of all of the excess oil and dirt.

There is a false idea that using water to clean your engine is always a bad thing. While engines can suffer almost irreparable harm from having too much water getting in, for the most part water on your engine parts is usually safe. And indeed, cleaning your engine bay, including using water, is something every car owner should be doing at least once every 3-6 months. The biggest concern you will have is using too much water at too high a pressure. There are certainly methods for how to clean engine bay without water. However, for the best results, you will want to use at least a little bit of water during the process.

Despite some disagreements to the contrary, cleaning your car’s engine is more than just for cosmetic purposes. Years of oil changes and servicing means your engine has likely collected dirt, debris and oil on almost every part imaginable. And while it may be easy to just shrug this off as normal wear and tear, it’s anything but. The build-up of oil on the engine parts will attract dirt. Dirt can negatively impact your engine’s performance.

Don’t just turn to any ‘ol YouTube video for cleaning methods, however. “I know how to clean your engine bay” says one YouTuber. “ Just power wash it!” If you love your car, you’ll do no such thing! Engines are complex. They’re comprised of numerous tubes, connectors and rustable metal parts with hidden openings. Power washing your engine bay can cause hundreds, if not thousands of dollars in damage. It might be quick and easy, but you’ll possibly regret it later. Your engine may be able to handle a bit of water, but it’s not the water that’s the problem with power washing. It’s the force applied.

If you’re ready to clean your engine bay today, you’ll need these items:

Don't make the mistake of just popping the hood and spraying everything with water. This is often what drivers do at the first sign of spilled oil in their engine bay. In doing so, however, they expose sensitive components to moisture, potentially damaging them in the process. Likewise, this could cause a massive amount of wastewater to end up in the gutter -- something that is illegal almost everywhere.

Before you can clean the engine bay, you need to cover up the following components with trash bags and duct tape:

How To Clean Your Car's Engine Bay

Cool or warm water against a hot engine weakens the metal and can cause the metal to form cracks. This is a sure way to damage your engine while trying to clean it. Always clean your engine when the car has been off for several hours. In the morning is a great time.

Going back to the basics of high-school chemistry 101, water and oil do not mix. Therefore, attempting to clean oil by washing it off your engine bay with just water generally doesn't work. You must first spray it with some type of degreaser, such as Simple Green. Just remember to use caution so it doesn't get on the paint. While degreaser is effective at eating through oil, it may also eat through your car's paint.

Work your way through the engine methodically. Start by degreasing the outside areas of your engine bay first, then work your way in. It’s best to try to degrease, and then clean, small sections at a time.

Using some small handheld detailing brushes or the soft cloth , scrub the components that are covered in oil. This isn't going to completely clean them, but rather will loosen the oil so it washes off more easily. You can scrub or rub in the degreaser in whatever pattern you want. However, a circular pattern is usually preferred.

Last but not least, rinse the areas you’ve applied the degreaser to after you have scrubbed it with a bit of elbow grease. This is where you’ll be spraying water--but as little as you can manage. Likewise, as we mentioned before, avoid using a high-pressure nozzle. If you are using an adjustable nozzle, change it to a light pressure setting, such as you would use for watering delicate flowers or small children on a hot day.

Also assume that you will have oil run off with the water. You'll probably need to use a special car wash with a waste drain, as rinsing oil into the ground is illegal in most areas and could result in a fine.

Repeat the process until you’ve managed to get to every spot in the engine. When you’re finished, use a leaf blower to help dry up any remaining moisture. Alternatively, you might try to clean your car on a somewhat warm or hot day. This will allow the water to evaporate off of the engine parts quickly, without the need to use any other tools to get the engine parts dry. At this point you can remove the bags and duct tape covering the aforementioned components. You are now good to go!

If this sounds like too much work (it should only take 25-40 minutes, but we won’t judge), you can always take your car to a professional body shop to have them provide you with the engine detailing service. Many body shops carry steam cleaners that are used specifically for this reason. Rather than exposing your engine to high-pressure water, the body shop will use a steam cleaner to remove any oil or debris. Prices for engine steam cleaning vary, depending on the body shop and your location. However, most places charge somewhere between $75 and $200. 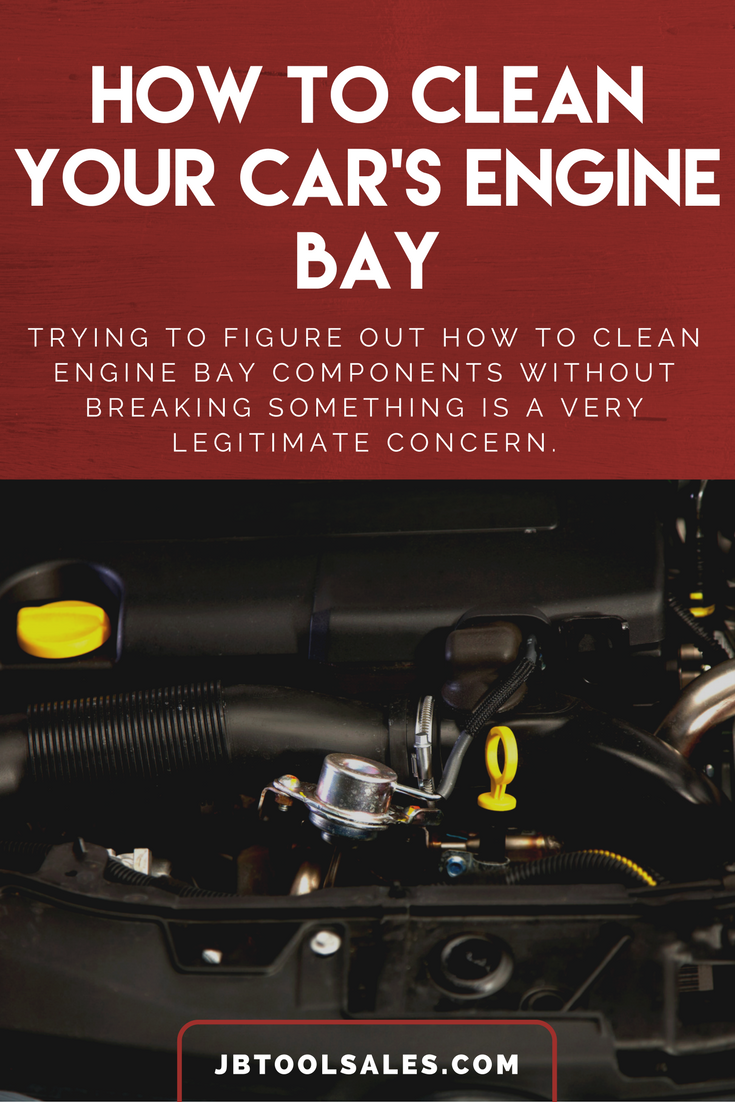