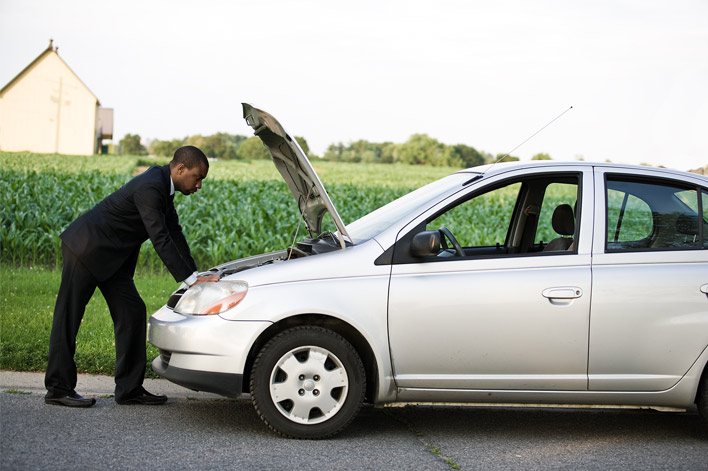 Your mind is whirling with the list of things you have to do as you settle into the driver’s seat of your car. It’s a good thing that it’s Saturday because you know you have all the time you need without affecting your work schedule. You put the key into the ignition switch and attempt to start the car.

The car doesn’t start and you hear either a click or several clicks, the engine attempting to turnover without success, or a cringe worthy grind. The car won’t start. Has the starter failed?

How can you tell if your start is going out and how do you fix it? First, of course, you need to understand what the starter is and how it turns on the engine.

What Is A Car Starter

A car starter is an essential part of the car because it actually turns the engine on. It is a motor that works all sorts of other parts that need to work properly to ultimately engage the engine to start. These parts include:

When you turn the key in the ignition switch the car’s battery is engaged and feeds an electric current through a thick wire to the starter motor, which activates a solenoid that gets an electromagnet to attract an iron rod that closes two heavy contacts that completes the circuit from the battery to the starter. The starter motor then causes the pinion to move and engage a large gear ring that turns the engine flywheel and starts the engine. When the ignition switch stops feeding current to the solenoid, the contacts open and the starter motor shuts off.

How to tell if your starter is going out

Right off the bat, if the car won’t start after turning the key in the ignition switch, your battery could be dead. So it is not uncommon for one to check the condition of the battery. However, if the battery is not the culprit, then it is possible that the starter is.

Others Things To Check

When troubleshooting signs of a bad starter, it is suggested that you check into the basic things first. This would include:

A weak battery can also be the culprit if the engine cranks very slow and won’t start. Again, determine if the problem is the starter or battery. If the battery is performing properly, then the starter motor is the problem.

If you attempt to start the engine and it cranks slower and slower and then clicks, then the starter motor is not getting enough power to turn over the engine.

The battery can also be considered if the instrument panel lights don’t go on when you turn on the ignition. Such an occurrence is a sign that there is no power coming from the battery. It could be due to a dead battery, but it could also be a bad ignition switch or bad wire between the switch and the battery. Turn the headlights on. If they work, the battery is okay.

If nothing happens when you turn the ignition switch on, then the starter motor won’t go on to start the engine. Again, a dead battery could be the cause. However, if the battery is okay, then the starter isn’t working for a number of other issues. The signs of a bad starter include:

What should I do?