Torque vs horsepower. These terms get thrown around as casually as candy on Halloween. When we hear the terms “torque vs horsepower in cars”, we should expect someone to actually tell us what these things mean, and why we should even care. Good news! We’re about to do just that. Start your engines, because today’s lesson is going to take you right into, well, the engine.

We know you’re excited to finally have the “torque” and “horsepower” concepts revealed. But let’s take a step back. It’s hard to understand these two things without understanding a few other concepts first.

All things mechanical (cars, boats, even humans) move in different directions (at least when they’re working correctly). If you decide to start walking, you’re moving forward. Your legs and muscles are helping to propel you. That doesn’t just happen on its own. There’s physics involved! That motion takes energy. And energy is transferred through work.

When you walk down the street to your favorite store, muscles transfer energy to move your body forward. Walking takes only a small amount of work, so it’s not very tiring. You’re not transferring much energy to the ground. But what if you needed to pick up the pace? If a hail storm breaks out, you’re going to need to start running. Running requires more mechanical work, transfers more energy, and ultimately makes you more tired.

Whether your run in the hail for 2 minutes or 20 minutes, this all requires the same amount of power. Power is simply a measure of how much force, or exertion, you have to put in in order to move, combined with how fast you’re actually moving. So if you’re pushing a baby stroller through the hail storm while running, you’re going to need more power. Achieving that much power will require more energy to be transferred through the work your body has to put in.

Hopefully you don’t get stuck running through a hailstorm with a baby carriage. But if you do, we suggest having a few energy bars. Especially if you’re running uphill (which is going to require more energy, work and power).

So What About Torque?

When car companies, car makers and your neighborhood mechanic start talking to you about torque, what they’re really talking about is the amount of force occurring when things are turning. As you probably already know, cars are all about things turning. Turning wheels, turning axles, turning gears, turning engine parts. Everything in a car is constantly in motion. How fast or how slow you can turn something around a center point is usually dependent several things: How long the arm is attached to the center point, and how much force you put into turning it. Confused? Don’t worry. We’ll clear it up.

Let’s say you’re working on fixing a bike. You’re trying to remove a bolt, but it seems to be stuck in place. You grab your handy 3-inch-long wrench and try to twist. Uh oh. You can’t seem to budge it! As hard as you try, it just won’t move. Your neighbor comes along, laughs at your pitifully small wrench, and lets you borrow his 6-inch-long wrench. Voila! Your screw is untightened in seconds. But why?

Since you weren’t able to apply more force (you didn’t suddenly increase the amount of strength you have, so the amount of force you can put out is limited), you needed to lengthen your distance from the bolt. Think of it like a door. If the door handle was next to the hinge, you’d never be able to open the door. The handle would be too close, and you couldn’t turn the door to open it. Torque is simply how fast you can accelerate the arm around the bolt (your axis) with the amount of force you apply. Since the arm was too short, you weren’t getting any acceleration (and no torque). Lengthen the arm, and you were able to get some acceleration, and therefore, some nice, handy torque.

This photo illustrates this concept: 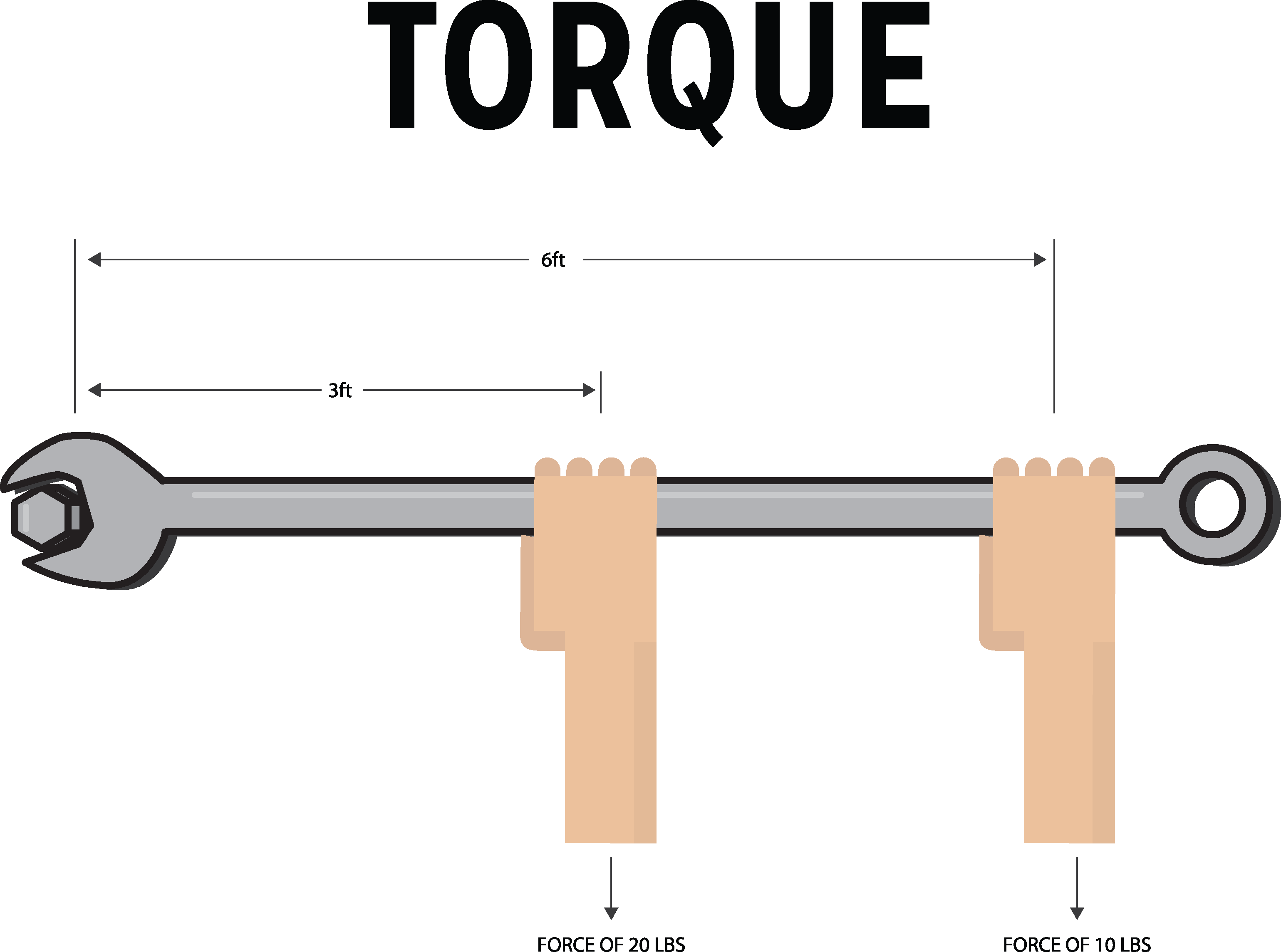 What gear you put your car in will affect how much work your car has to do in order to actually move the car. This is why cars move between gears when adjusting speed. You’ve heard the term, “an object in motion stays in motion”? This is true for cars. A car that is not moving requires more torque to get moving, than a car that is already in motion. The lowest gear provides the most torque, but you wouldn’t keep the car in first gear at high speeds. Your engine will have to rotate more in order to turn the wheels, and that’s not a good thing. Less torque is needed at high speeds to maintain the high speed.

But What About Horsepower?

Here’s where people sometimes get confused. Horsepower and torque are not inseparable. If your mind was just blown, we’ll wait a second while you put it back together. Despite what you may have heard, and how they’re talked about, horsepower and torque are not inseparable and not in competition. In fact, horsepower is simply a calculation of how much torque is being applied and at what rate, divided by a standard amount of pound force. To figure out the horsepower, one only needs to grab a calculator and do some simple math!

If your car only has one horsepower, this means that the engine (and therefore the car) is only able to pull a relatively small amount of weight. Better torque and a more efficient, faster engine, means more horsepower. This means your car can pull more weight. But why is that important?

Let’s go back to you running in the hailstorm. Running through the hailstorm unencumbered will give you more speed. However, if you’re towing along the baby carriage, the added weight is going to slow you down. Let’s say you’re towing 5 baby carriages. The required work would be significant. The more weight you add, the more force you need to exert.

Cars makers boast about their horsepower for two reasons. First, it’s a handy number to use when trying to promote how quickly a car can reach the much-celebrated “0 to 60 mph” number. Who doesn’t want a fast car, right? The second is for the more practical reason: It helps understand how much weight someone can haul. For this reason, big rig trucks will have much more horsepower, because they produce much more torque at a similar or faster rate.

Ultimately, don’t let yourself get too hung up on the torque vs horsepower in cars debate. Unless you’re looking to haul some serious weight, neither should be too much of a concern.

To summarize up all of the terms and concepts you've just read, this chart will help drill them into your memory: 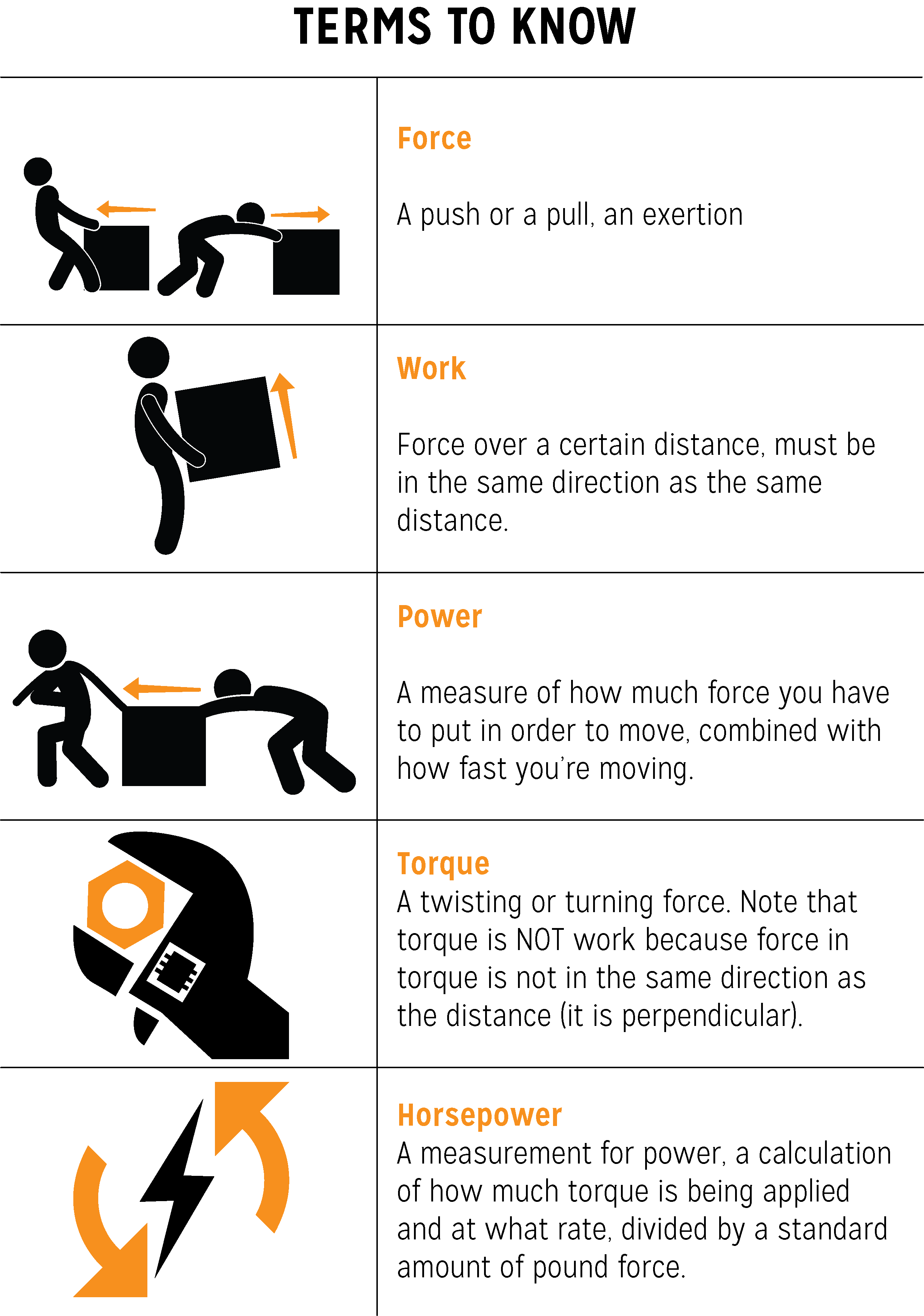 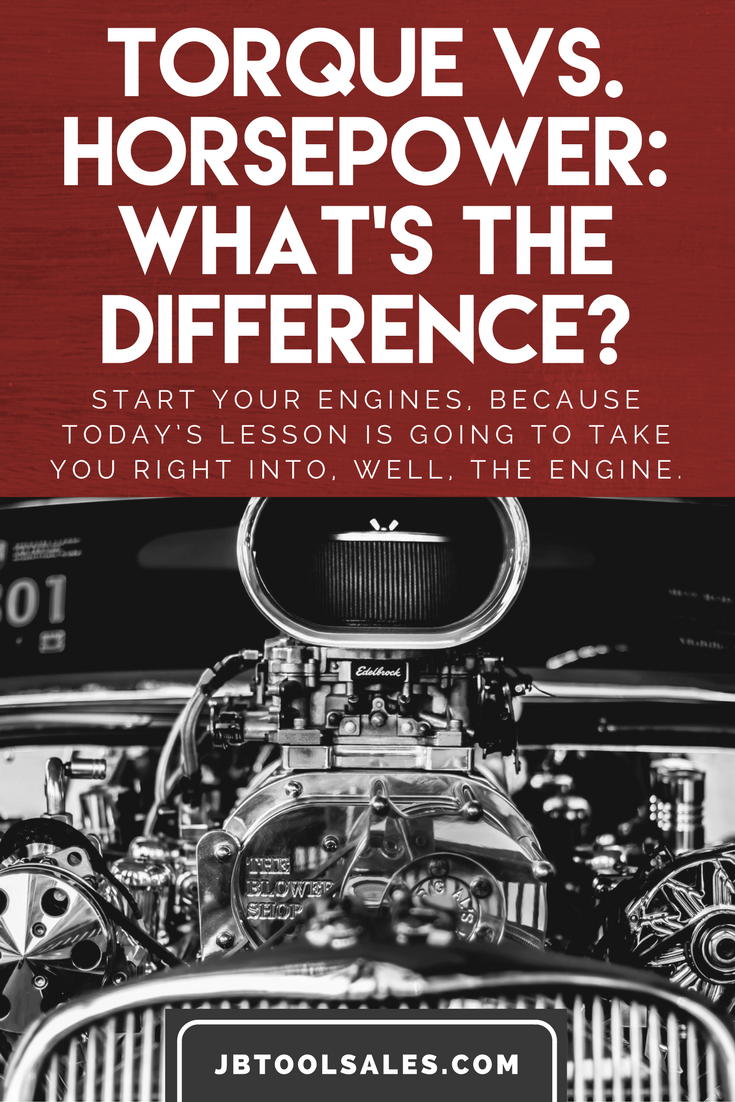